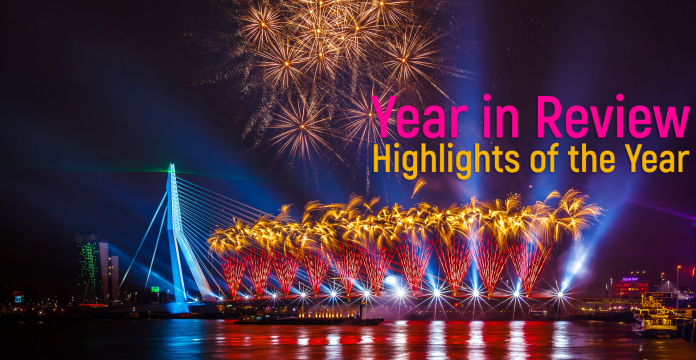 This year is almost over, as in a few hours I will be celebrating new year’s eve with most of my friends. In this last (… and only) blog post of the year I want to recap an incredible year, both work / community related and personal, as a lot has happened, even it was not visible here.

The most important thing that I have worked on this year is something I’m really proud of and that is finishing my second book. This time I deep-dived into the technology behind blockchain. For the guys who do not know this, but in the beginning of 2017 my first book came out that I co-author with Phil Wilkins (a.k.a. MP3Monster) about implementing Integration Cloud Service. So this second book was really a back to back project as I started writing it only a few months later (June 2017).

The title of my second book is called Blockchain across Oracle, and the covers the details and implications of the Blockchain for software developers and customers familiar with Oracle. The reference to Oracle is based on the implementation part of the book that uses the Blockchain Cloud Service and why/how Oracle is disrupting the blockchain space.

The book covers the following things:

Most of the book (14 of the 18 chapters) can also we read by people not working with or implementing Oracle-based solutions.

The book is a must-read for everyone interested in Blockchain, both in increasing their knowledge as in actual design and implementation.

The book was released on 15th of October (after 1,5 years of writing) and can be bought online at:

A lot of traveling and speaking at conferences

Besides writing the book I have been traveling a lot, which most was work related. Thinking about this I estimate around 90% was for speaking engagements at conferences. Looking back I did 5 Oracle Code events; New York (March), Warsaw (May), London (May), Berlin (June)…flight was cancelled, Paris (July), and the big one in San Francisco (October). I also presented two topics at the NLOUG Tech Experience, two topics at Oracle OpenWorld and did some local events in the Netherlands at (developer) meetups.

One other event I attended was the Oracle Partner Summer Camp in Lisbon. This yearly events organized by Jürgen Kress was extra special this year as I participated in the first Hackathon. During five days of hacking myself together with a team of three special people (thanks to John Sim, Sanae Bekker and Finn Mohr) build a solution for decentralized consent management, based on the architecture below, in which I was responsible for hacking the Integration Cloud and Blockchain Cloud Service / smart contract implementation.

We eventually won with more than 28 votes difference on the #secondplace team. The below image show a nice flight map of my travels:

Hope this explains a little bit the missing blogs I normally write throughout the year.

When I has the change I did some (live) interviews and podcasts on and off camera. In most cases is was to promote my blockchain sessions and my book. Below a few of these interviews and sessions that where posted on YouTube.

With as highlight my session during Oracle Code One in San Francisco.

Some people in the community call all the travels and interviews a Rockstar life, and I guess some of that is true, but there is a downside. My days where very long, first working at my full time job and afterwards writing on my book for a few hours a day. Not even counting the massive amount of Sundays I worked on the book. Traveling is fun, and I love it, but they can be really tiring, certainly the transatlantic flights. And with all the things I did the past year(s) my personal life (incl. relationships) was set on-hold.

Living a rockstar life is hard work, still very cool and fun, the only downside is trying to stay healthy!

The result of this is that I gained a lot of weight the past 2,5 years, because of bad eating habits and not exercising at all. My time was so precious it went into the book. Now that all is done I started focussing on me, my family and friends for a change. I started training with a personal trainer two morning a week, eating healthy using fixed menu’s (different every day of the week, week in / week out), and walking a lot (10000 steps minimum a day). In past 8 weeks I already lost 8.6 kilo.

As the hours left in 2018 are almost up I like to wish everybody a happy and healthy new year and all the best in 2019. Next year I still be traveling, I still we speaking at conferences and I still do much the same as this year, but to a lesser extent. Stay tuned… as I will be writing a separate blog post on this (probably) tomorrow when I’m going to discuss my new year resolutions for 2019.